iPadOS Changes Everything You Knew About iPads

iPad Will Never Be the Same

The iPhone has always been the center of the iOS universe. Which meant that the iPad started out as nothing more than a huge iPhone that can’t make calls. Over time, as the market changed, Apple began to push the iPad down a different road. Its user interface got lots of attention, as better decisions were made to capitalize on that large display.

As Apple started to think of its iPads as something that could compete with laptops, the software had to evolve. Devices like the Microsoft Surface ran Windows, which basically made them tablet-shaped laptops. Now with iPadOS, a dedicated and specialized OS for iPad, everything is different and your iPad might very well make the need for a laptop a thing of the past for most people.

It might not be immediately apparent, but iPadOS has received a comprehensive makeover when it comes to looks. The biggest change is a reduction in icon size. Any iPad still worth using is rocking a retina display, and shrinking the icon grid down in size has done nothing to hurt their readability. What it has done is create a lot more breathing room on the tablet. It feels much less “Fisher Price” and more like a serious computer.

You’ll find the dock launcher is also a little roomier, and when you long-press on icons there are more options, as on iPhone. There are way too many small changes to the user interface to list here, but iPadOS has a significantly different feel to use. 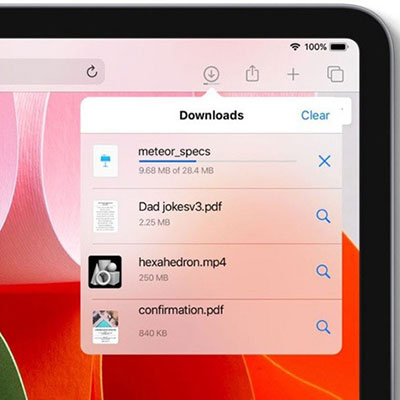 There has long been this idea that Apple bogs down older devices with new iOS versions. This is probably not strictly true, but my iPad 3 became unusable with later versions of iOS, which meant I stopped using the poor thing despite the hardware being just fine.

That’s absolutely not true for iPadOS. Every iPad that can upgrade to this version of the OS will have better performance. On some models it’s a dramatic improvement, on others less so. But no iPad that can take iPadOS will be slower after the upgrade.

So if your iPad is on the list of compatible devices there is no reason to hold back. Go ahead and do that sweet upgrade dance.

This is another feature found across all iOS versions, but it’s an especially great one for iPad. In the past you had to use an MFi controller and we’ve reviewed quite a few decent ones on this site. However, you just can’t beat the two most prolific controllers on the market. All other controllers are living in the shadow of the Xbox One controller and the Sony DualShock 4. They are pricey, but the quality and comfort is top notch. Now you can pick almost any one of these controllers up and connect them to your iPad in seconds. All MFi games work just as they would with an MFi controller. Stick clicking works for games that support it as well. I’ve tested both controls with numerous games and it is a revelation!

While playing native games with these controllers is excellent, things really come into their own when you use game streaming apps. You can stream from your PS4 or gaming PC using the respective apps from Sony and Steam. If your home router is fast enough, the experience is pretty flawless. Now you can access these high-end gaming systems anywhere with good WiFi signal where you live. With more game streaming apps coming in the future, this is a feature that will just get better with time.

One thing that’s always sucked about iPad is how clunky the keyboard was. It always takes up a huge chunk of the screen, which is a good reason to use an external keyboard. Now you can shrink that keyboard down for one handed use or limited text entry when holding the tablet in both hands. A proper floating keyboard makes more sense for a tablet than the half-screen version that’s good for a phone with a longer aspect ratio. It’s amazing that it’s taken 13 versions of iOS to finally get it. It really completely changes how usable these tablets are.

Yes, you can actually attach a wired mouse (on USB iPads) or a Bluetooth model to your iPad. However, this is an accessibility feature, not yet a mainline one. So the implementation isn’t great. However, for someone like me who does a lot of text selection, having to reach out and move the cursor or select text is a pain when you do it 1000 times a day. Now, incidentally, iPadOS has also made touch-based text selection better, but you still can’t beat a mouse for that. I haven’t tested this with my own iPad yet, so your mileage may vary, but it’s a feature worth knowing about.

While other iPad browsers may follow suit, the built-in Safari browser is now identical to the one you’d find on MacOS. In fact, web servers now think you’re using a Mac, which I guess could cause some minor niggles from time to time. The upside of this is that you will now get the full desktop page renders. Since iPads range from 9.7″ to 12.9″ when it comes to screen size, there’s no reason to be stuck with cramped mobile site versions.

This version of Safari is also fully compatible with the new multitasking features, which we’ll get to next.

When the iPad version of iOS first got split-screen support a few years ago, I was finally able to ditch my laptop. Now that I could have my word processor and browser open next to each other, I could actually get some work done. It took some time for apps to get split screen support, but today most do. At least for the apps where it makes sense. Unfortunately within-app split screen was still off the table. So, for example, you couldn’t have two Safari tabs open in split screen, but would have to use two separate browser apps to get the same effect.

That’s all changed with iPadOS. Given that a specific app supports it, you can now split the same app into two on the screen. Native iOS apps such as the File Explorer are way more useful when you can open two folders side by side!

There’s an iOS app that I absolutely adore called Duet Display. This neat app allows you to use your iPad as a USB screen. Install the app and software on both devices and then simply plug the iPad into the computer using its cable – it instantly becomes a second screen. This is incredibly useful if you also have a laptop and want to be more productive on the road.

Whether Apple took inspiration from this or not we will never know, but if you have the right model of Mac and the right generation of iPad with iPadOS onboard, you can now use it as an extended display.

Sidecar is more than just a simple screen extension. There are native and third-party apps on MacOS that will interface with Sidecar and you can now also use the Apple Pencil through the iPad on MacOS, turning your iPad into a proper drawing tablet for Mac.

Widgets have been around for a while on iOS, but they’ve never been a prominent feature of the OS. Now, in its effort to be more like a laptop, iPadOS has revamped widgets. They’re now way more useful than before. The main change is that you can now permanently keep widgets on your home screen and easily edit which ones are there and which aren’t.

The Pencil is Better

If you have an iPad that can use the Apple Pencil and you have indeed been enjoying this amazing drawing device, you’ll be happy to hear that Apple has spent quite a bit of time at making the Pencil better to use on iPadOS. The latency has been reduced by half, which goes a long way toward making the pencil feel snappy and more like a real drawing instrument.

You can now download any file in Safari to a folder on your iPad and then access it using the File Explorer. No more hand-holding; iPad users now really have a big-boy computer.

iPadOS is an almost total reworking of iOS on iPad. I could never list all the stuff that’s new or improved, but as the article title says, this is everything I think iPadOS users NEED to know about their new operating system. I’ll leave it up to you to discover all the small improvements and additions for yourself.

The best thing about iPadOS is not any particular feature. It’s the fact that this is a sign of the direction Apple is taking their exceptional tablets. The iPad has always offered the premium tablet experience, but now it’s starting to take over the role of lower-end MacBooks. People who buy the entry-level MacBook laptops pretty much use them for tasks that a modern iPad can handle without breaking a sweat. In fact, iPad Pros are so powerful that they become viable for a certain level of heavy lifting in areas such as photo- and video-editing. Apple has managed to make the iPad virtually as capable as a laptop without hurting any of the intuitive simplicity of the device. That was a tall order and this was achieved in increments rather than leaps. But with iPadOS we can rest assured that the iPad is coming into its own as an essential and capable computing device.